Making a Beach Cairn
Originally uploaded by escher1
'How to' video.
Posted by Mike1727 at 1:35 pm No comments: Imagine the feeling of suddenly getting heavier, falling to the floor, looking up at your family, unable to speak or make yourself understood. That's a stroke. That was me, a year ago.

Luckily, it was a small stroke and there are no lasting effects- a day later I was talking again, a year later I'm fine. My recovery is something which I am very, very grateful for. That and the streadfast support of my immediate family, notably my wife who went through a huge strain in the first few days.

So folks, don't smoke, excercise regularly, drink responsibly and keep an eye on your diet. All these things reduce the risk of strokes considerably.

And, when you have a little money to spare, put it here 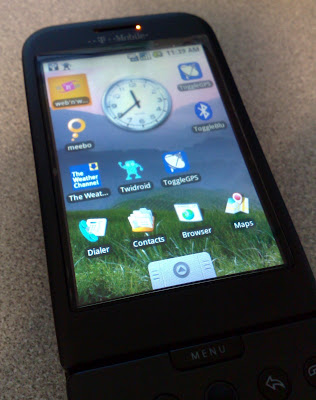 The mental synchromesh has more or less stopped working in the transition from N95 to G1. It's quite a change in OS, display and form factor and a jump from a fairly well established phone to a new 'device'which still has some teething trouble.
Here's a few thoughts based on my first week of use: 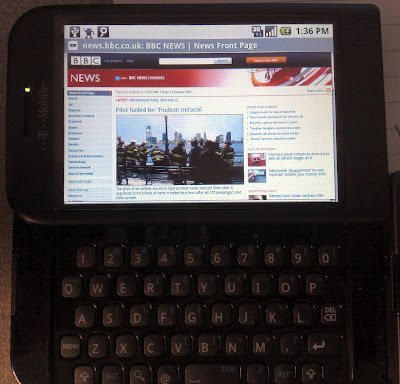 The G1 is a great web device. Browsing is excellent: it's easy to browse more 'full' web pages instead of PDA/smartphone versions now that page navigation and display is much easier. There are a few pages which don't really work but most of what I see is fine. Missing, however, are most of the add-ins like flash. Hopefully these will turn up pretty soon either as applications or as add-ins to the OS. 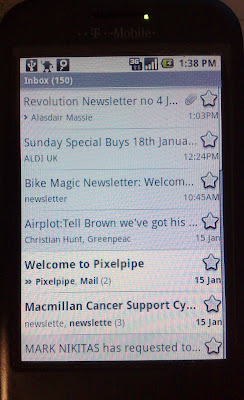 Google apps work well- I was using mail, reader and iGoogle on the N95, but now I also use contacts and I'm going to look at calendar. Relying on a single vendor for all my personal stuff is a little dubious but the disadvantages are outweighed by the convenience of having everything available via phone or pc. Maps is excellent too, I'm just waiting for google to launch streetview in the UK.

Beyond the browser, there's a market full of apps to download, currently for free. Some are good, some don't work or are really crap. Time and evolution will tell which survive but the combination of cheap, easily accessibly applications should drive usage.
I'm currently running: 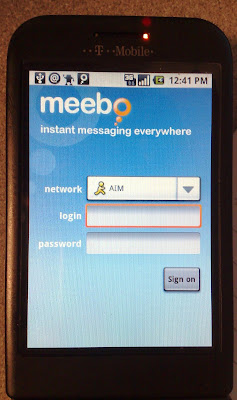 Meebo- looks a good IM client but seems to have difficulties and crashes when moving between 2g and 3g. I'll try it out once I've sorted out wifi at home. 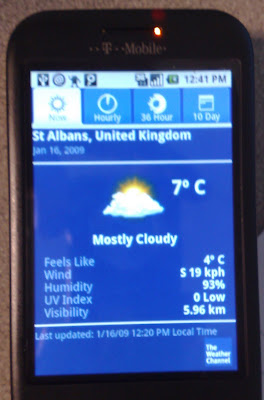 Weather channel weather report. Seems ok, can pick up location using GPS. It will be interesting to see how this compares with a shortcut to the BBC weather forecast in the browser which I would usually use. Accuweather looks good too- same sort of content. 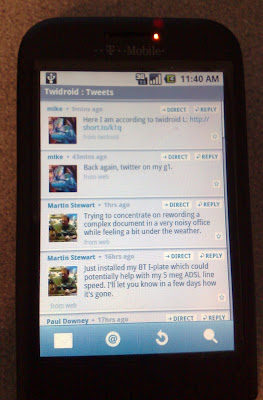 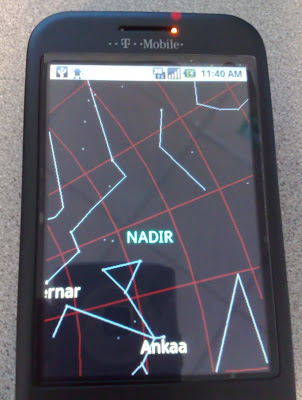 Sky Map- map of the sky showing positions of stars, constellations. Location aware and links with the position sensors so that you see the star layour in the direction you're pointing the phone. I like this app, having been looking for an easy to use star map for a while. 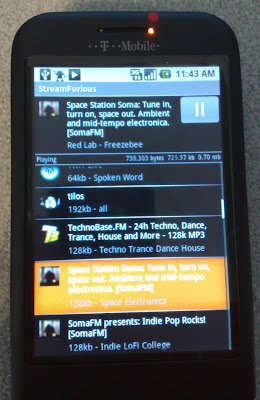 StreamFurious- Good streamer for shoutcast. A bit short of other radio stations though. 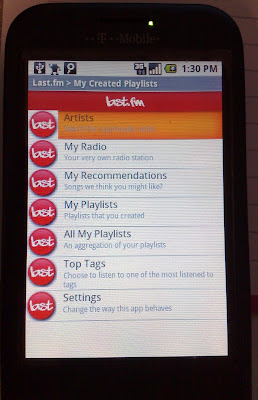 last FM- a good looking client which doesn't work very well. Nice idea, hope the client gets sorted out soon as I'll use it lots. 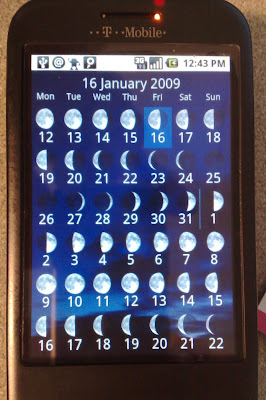 Lunar phases: moon calendar showing phases of the moon, because I want to take photos of the moon. 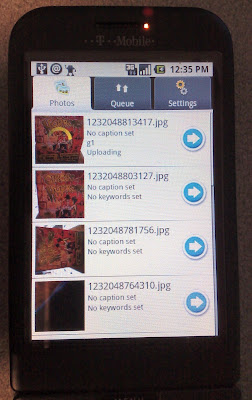 Pixelpipe- uploader for Flickr, blogs etc. Still working to get this installed and working properly but it looks good.

Waiting in the wings to see if they're any good:
Mymaps editor- edits google maps
Cellfinder- shows map of your location and the cell you're connected to. Usful for cellular geeks.
Photostream/PicPush - uploader for Flickr.
Wheeler- bike ride trip recorder. Not as good as Nokia's sportstracker.
On the down-side:
Battery life is awful
g1 doesn't receive quite as well as the N95.
Browser and app activity when shifting between 2G and 3G is variable.
Bluetoth support is pretty crap, I couldn't connect the G1 to my N95 or send files to/from the g1 to my laptop.
On the severe downside:
The g1's camera is, well, shite. 3MP, no zoom or flash. It's so bad that I'm currently not using it and am still carrying my N95 just to take pictures. Fail, fail, fail in design spec here, even low end nokia cameras are better than this.
Overall it's a good start for Android, shame about HTC's build of the phone but other manufacturers will do a better job.
The G1 isn't a phone for Flickr'ing, sadly. Now, if LG broughy out an Android Renoir, that would be a flickr phone.
Posted by Mike1727 at 12:26 pm 4 comments: