The literal translation is "pedaling in semolina," and it means being entangled in a thorny situation, with the added notion that every effort made to get out of it is fruitless, or makes things worse. In short, being confused and overwhelmed, or being in over one's head.
Posted by Mike1727 at 12:30 pm No comments:

Justice, of a kind- if a seven year sentence, presumably reduced for parole, compensates for killing someone.

A DRUNKEN taxi driver who killed a cyclist two hours after telling a work colleague he was ‘totally smashed’ has been jailed for seven years.

Simon Gatier, 41, of Salisbury Gardens, Welwyn Garden City, was found guilty of causing the death of Neil Smith by careless driving while under the influence of drink or drugs. St Albans Crown Court heard how on November 30 last year Gatier fled the accident scene, leaving three teenage boys to comfort the 43-year-old victim, who lived in Welwyn Garden City and worked at St Albans City Hospital.

Gatier, who has a previous conviction for drink-driving, lay low for three days before handing himself into police.

Judge John Plumstead said that by driving off Gatier had “behaved in a callous way and showed no remorse.”

“He was highly thought of at St Albans hospital and they have named a corner of a garden there after him. He was sober and was smashed into as he went along the yellow lines of the road - dressed as brightly as he could be with his lights on.”

The judge went on to describe Gatier as a "thoughtless, cowardly man who was driving too quickly" in the circumstances of a wet road at night.
Posted by Mike1727 at 12:39 pm 1 comment: 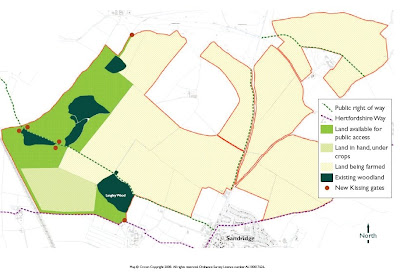 Good news about land access in the soon-to-be-planted foreast at Sandridge.

Now what's needed are some more rights of way to ride on, I'm assuming pedestrians can access all of the new area. It's about time someone talked to the Woodland Trust about MTB access... Turbo training in front of the TV, originally uploaded by mike1727.

Autumn's here and with it the waning of the light, so evening rides are going out of the window, to be replaced by nights in front of the TV..

I'm aiming to increase my daily commute riding up to about 1 hour 30 3 days a week using the turbo for 50ish minutes in the evening, trying to find a beginner's training guide and stick to it.

Boredom is the issue on a turbo so I'm loading up my phone with podcasts- Podrunner is good music with podcasts at certain BPMs and intervals too. My own intervals can wait for a bit. Last night's training left me with tirde legs today.